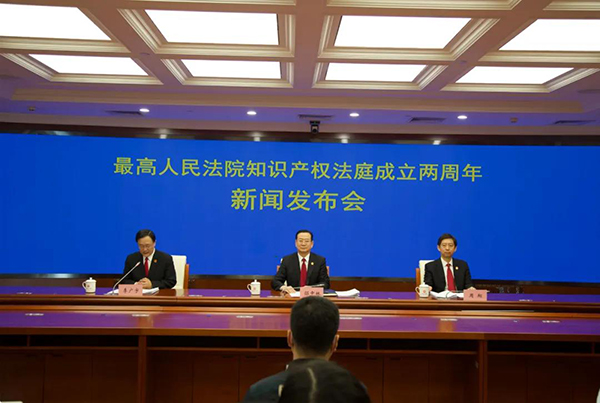 The national-level Intellectual Property Court in Beijing has accepted 5,121 cases, with 4,220 of them concluded since its establishment in 2019, according to a report released by the Court on Friday.

The report also said that the cases accepted by the Court last year increased as much as 63 percent compared to 2019 due to the continued rise in intellectual property disputes.

As a standing judicial organ under China's Supreme People's Court, the IP Court was set up to hear civil and administrative appeals on technology-related intellectual property disputes and anti-monopoly disputes, and it aims to help prevent inconsistency of legal application and improve the quality and efficiency of the trials related to IPR.

He Zhonglin, first deputy chief judge of the Court, said at a news conference on Friday that the Court has published two sets of annual judgement digests, including 86 judging rules from 91 typical cases over the past two years, which has effectively promoted the unification of the ruling standard on trials related to IPR.

Since the cases handled by the Court are complicated and demand specific knowledge and skills in the sector, He said, the Court has selected 39 professional judges across the country, and 36 percent of them have technical and legal interdisciplinary backgrounds to better fit the job.

According to the report, the Court had held 114 series of Judges Conference in the past two years to study difficult legal issues related to IPR and established a talent pool with more than 450 technical investigators covering more than 30 technical fields.

"It took about a year for a technology-related IP appeal to be settled by High Courts before the IP Court was established. But now the IP Court only takes an average of 123 days in 2020 for one case to conclude," said He.

According to the decision made by the National People's Congress in 2018, litigants who disagree with the rulings made by the local people's courts including specialized local IP Courts, could appeal directly to the SPC's IP Court.

In 2020, the Court also heard 376 technology-related IP cases involving parties from Hong Kong, Macao, Taiwan, and foreign countries, with 281 of them concluded.